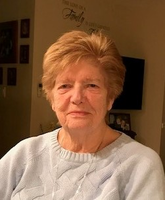 Mrs. Anderson was born October 4, 1936 in Brooklyn, NY. She is the daughter of the late Thomas and the late Sadie (Balcezak) Konowski.

She was predeceased by her husband, Raymond  Anderson on April 14, 2003.

She is survived by two daughters: Barbara Kriner; her husband Michael and Doreen Johnson; her husband Ragnvald, and one son Ray Anderson; his wife Jennifer.

She is also survived by grandchildren; Ashley, Matthew, Steven his wife Kristen, Lauren, Megan and Julia.

She also had Many Nieces & Nephews.