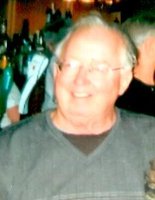 Francis “Buddy” McCarthy passed away on March 14, 2020. He was happily married to Kathy “Bonnie” née Nugent for 53 years, father to Noreen and Kathleen, beloved grandpa to Caitlin and Keira and uncle to many nieces and nephews. He was the proprietor of Poles McCarthy and Shenanigans Pub in Brooklyn. As a life long Brooklyn resident, Buddy was also a member of the Hudson River Yacht Club, 4th degree Knight and past Grand Knight of The Knights of Columbus Brooklyn 60, and International Order of Alhambra. He also served as an Aide to the Grand Marshall in the Brooklyn St. Patrick’s Day Parade. Buddy was a true gentleman and was considered a beacon of hope for newly arrived Irish immigrants in Brooklyn. He sponsored many young Irish people and helped them gain employment and start a new life. Buddy had a strong faith and was devoted to his family, his community, and his God.