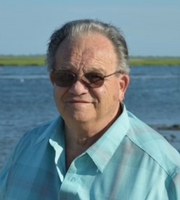 In lieu of flowers, Franks family asks for donations to Memorial Sloan Kettering Cancer Center in his memory. For those who had the pleasure of knowing him, you know he was stubborn, grumpy and full of his own humor. He went along to the beat of his own drum most days. He was set in his ways and you certainly couldn’t change his mind once it was made up. He enjoyed nothing more than a fresh Nathan’s hot dog, floating in his pool and puffing on a cigar while working in his garage. He was handy, a great cook and a real jokester. He always had the biggest heart and the sweetest smirk. Any day of the week you could walk into his house to find him there, at his post, in front of the window in the recliner. We are thankful for the eighty years we had him here, but it will never feel like enough. We will miss him forever and our days will never be quite the same. We’ll forever be looking for that little wave in the window. Beloved husband of Jane. Devoted father of Lori (William), Dawn (Mario), Frank Jr. (Maria), and Louis. Loving grandfather of Ashley, Nicholas, Francesca, Isabela, Mario Jr., and Grand-pup Maddie. Cherished brother of John (Emily), the late Ernest, and sister-in-law Carol. Caring uncle of Ernest (Angela), Christine, Leanne (Dale), and Michelle (Joe).