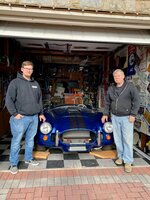 Matthew Howard Dalen, age 72 passed on November 22, 2021 at Winthrop University Hospital, Mineola, New York. Born April 27, 1949 in Copiague, New York. He was born to Allan and Winifred Dalen. He married Cynthia Austin-Dalen and they had one son Matthew Jeremy Dalen. Matt worked for multiple airlines including Eastern airways and US airways. Which allowed him to travel around the world to work on all kinds of aircraft. He also worked in several marinas which led him to open his own marine repair business. Matt enjoyed spending his Saturday mornings at Bay Marine having morning coffee and a buttered roll. If he wasn’t found in the house watching Jame Bond movies or reruns of old shows he could be found in his shed working on endless different types of projects or found on his boats trying to make everything he could perfect. Matt loved spending time with his wife and son. He really loved that he was able to pass his talent and knowledge down to his son and making him into a mechanic just like he was. Matt was the neighborhood repair man and he was happy that he was. Always offering a helping hand on anyones project. If someone had an issue with trying to get something working they would always come to Matt and he would have it fixed in no time. He was survived by his wife and son along with his two sisters and one brother. Matt will be cremated and a memorial service will be done on a later date